The joys of rambling, a treetop walkway, an exciting cycling route, water sports, iconic sites and adventures in a hiking camp – read on for six very special outdoor activities in the Saarland region.

Joyful Rambling on the Saar-Hunsrück-Steig Trail 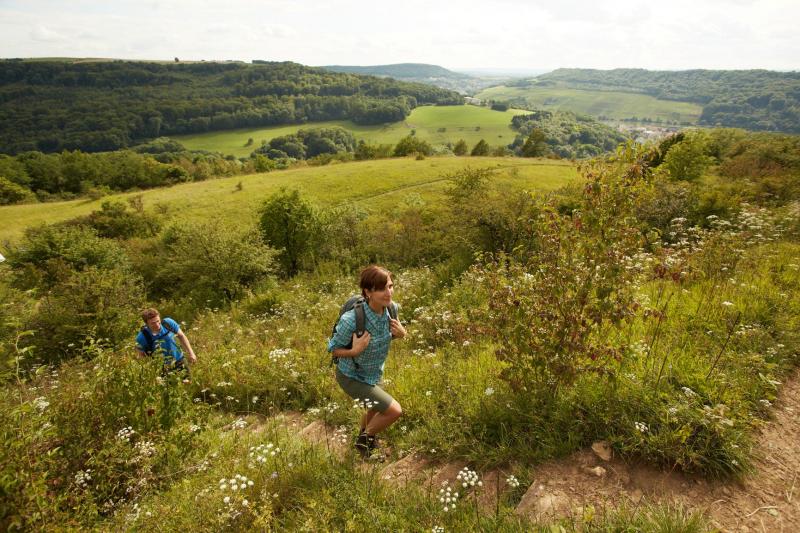 „The Saar-Hunsrück-Steig, twice awarded as Germany’s most beautiful long-distance hiking trail, covers a panoramic route with a total length of about 235 miles from Perl to Boppard in the neighbouring federal state Rhineland-Palatinate. Let’s concentrate on the trail’s first to legs (approx. 10 miles) where the hike from Perl to Hellendorf already offers stunning views of the Germany/Luxembourg/France border region and the wide valley of the Moselle river. Narrow paths lead through enchanted woods and orchid meadows. You will also come across ancient structures going back to Roman times. The following leg from Hellendorf to Mettlach reveals a view that will stay in your mind: Along small streams, the trail continues through the Steinbachtal nature reserve, then ascends towards Orscholz to finally reach the route’s highlight – the Saarschleife, where the river makes a spectacular bend. On your descent, there’s more time to enjoy great view of this natural wonder.

Explore the Region on the Saarland Cycle Trail 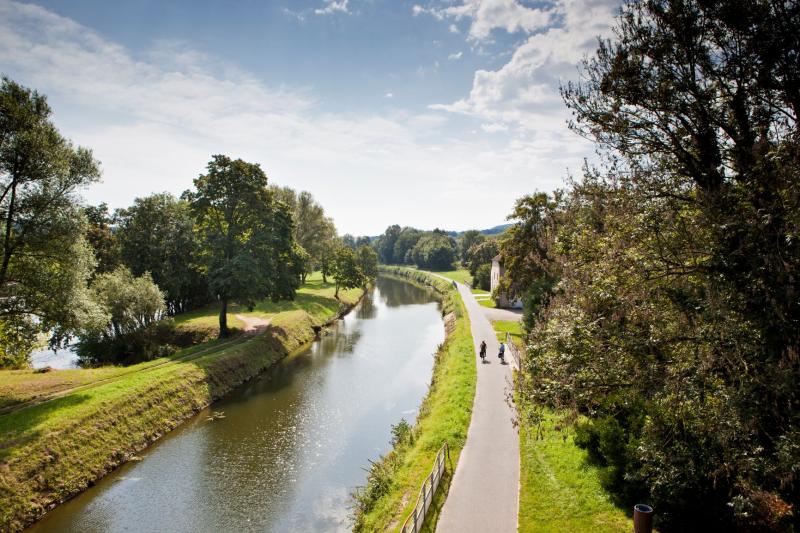 How handy. This federal state is so small that you can comfortably circle it on your bike in just one week. The Saarland Cycle Route offers major natural and cultural treasures along just under 220 miles. Starting in Saarbrücken, it first follows historic towpaths along the Saar towards Saargemünd, and later along the Blies towards Blieskastel. This little town is a baroque feast for the eyes. As the route continues, the cycle trail winds through the magnificently green Ostertal (Easter Valley). In nearby St. Wendel it is worth stopping at the late Gothic Wendalinus Basilica, and how about a picnic at Bostalsee lake? Soon you will reach Peterberg in the southern Schwarzwälder Hochwald forest to enjoy a wide panoramic view. And more tour highlights are waiting, as you follow in the footsteps of the Celts along the old ring wall in Otzenhausen. Last but not least, there are the region’s major landmark and highlights, such as the view of the picturesque Saarschleife river bend as well as the border region where Germany, France and Luxembourg meet, vineyards and wide orchards. Icing on the cake: a visit to the Völklingen Ironworks, a UNESCO world heritage site. 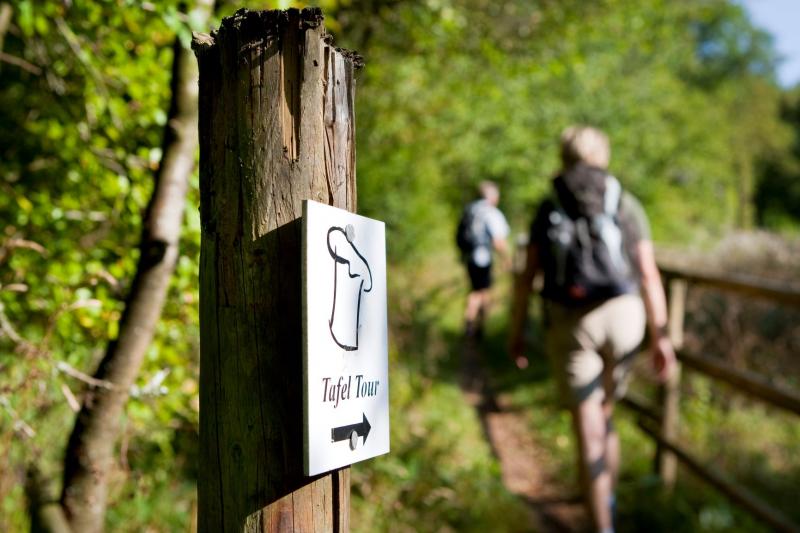 On 16 so-called “Tafeltouren”, you can both explore the Saarland’s enchanting scenery and its excellent regional culinary delights   © Eike Dubois

The "Saarland Tafeltouren" hiking routes offer a special kind of rambling experience, such as the “Saarschleife Tafeltour”, combining great rambling with plenty of opportunity for sampling the region’s food. Along 10 miles, it features bridges, castles and the finest views. It starts off from the town of Mettlach with an ascent up a forest path leading to a tree-covered mountain ridge. Your first stop: the medieval castle ruins of Montclair on the Saarschleife river loop, which used to serve as a perfect sentry over the river. From here, the route winds down in serpentines towards the Saar where you’ll have to cross the river. Just ring a bell to be found there for this purpose to give the ferryman a signal! (Who’s off on Mondays, by the way.) On the other side of the river, you’ll end up in a hiker’s paradise in the Steinbachtal valley. Over numerous wooden bridges, steps and stairs, the – partly steep – route takes you to the Cloef viewpoint, where the best views of the Saarschleife are river loop are your reward for having passed this test of stamina. Just exhale and enjoy. Romantic paths through the Weselbach valley finally lead back to the start and St. Lutwinus, a church of pilgrimage, in Mettlach. Along the way, there are various places to eat and drink, such as at the bistro in Montclair Castle or in the beer garden of “Mettlacher Abtei-Bräu” brewery.

Wilderness under the starry sky 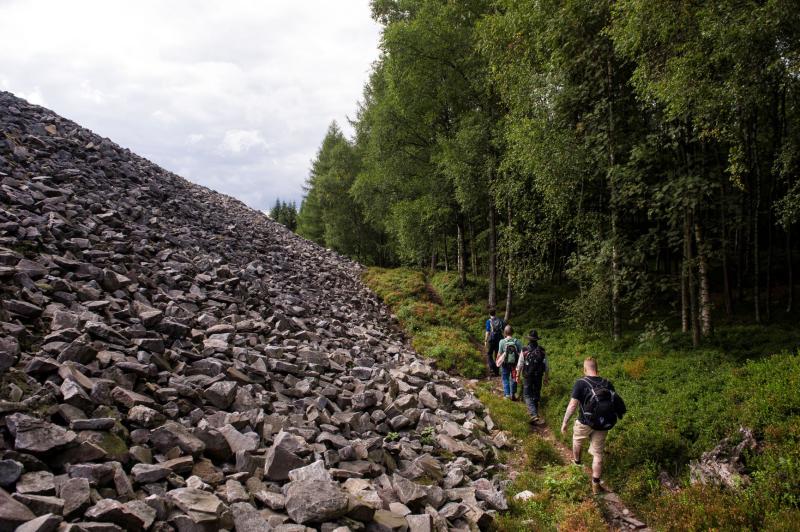 The Amazon jungle might be a touch more exotic but the jungle adventures to be experienced in the Hunsrück-Hochwald National Park are just as real. Imagine wild cats roaming through the undergrowth, 1,400 species of beetles crawling and moor dragonflies buzzing. It gets even better – with three bookable wilderness hiking camps hidden in the national park. Their names: Celtic Camp, Dragon Camp and Wolf Howl. They feature two wooden platforms, each of them providing space for two small tents. More than 2,000 years ago, where the Celts built a mighty ring wall here and the Romans left their marks, you can now fall asleep with the spicy scent of the forest in your nose and wake up in the dense jungle green.

The following applies to all camps: Bring your tent, food, drinks and toilet paper. Only the Dragon Camp has access to spring water nearby, however, it should be boiled. If you have several days for your hiking tour, you can combine visiting all three camps. 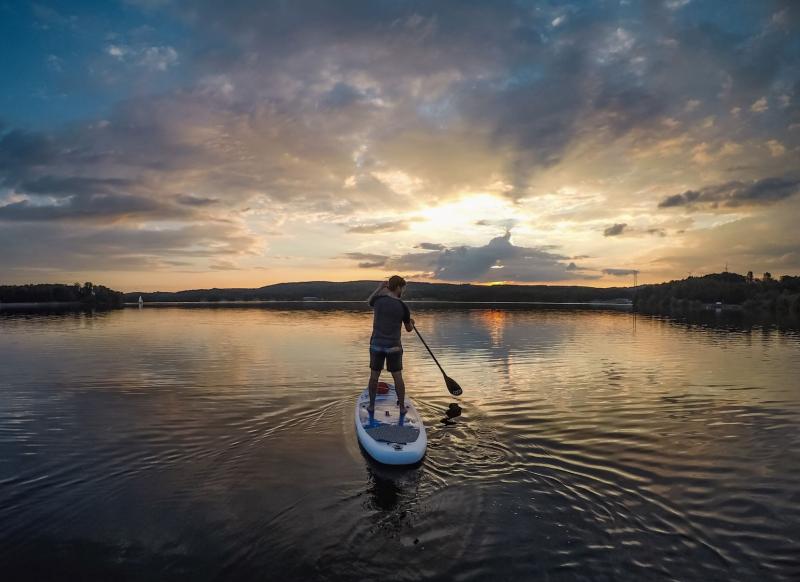 Enjoy the Bostalsee lake on a stand-up paddleboard (SUP). Courses for beginners are on offer, so no excuse! © Kevin Ehm

Bostalsee lake, a reservoir in the Saarland’s north, offers a wealth of water sports and leisure activities. You can surf, sail or go pedal boating. Or could we get you interested in stand-up paddleboarding? It’s a perfect way for leisurely gliding over the lake, easy to learn and boards can be rented by the hour. “Salt Surfschule” by the lake offers two-hour courses to quickly learn the most important tricks to keep your balance. And then, just drift over the water and enjoy the view of sailing boats and green shores. 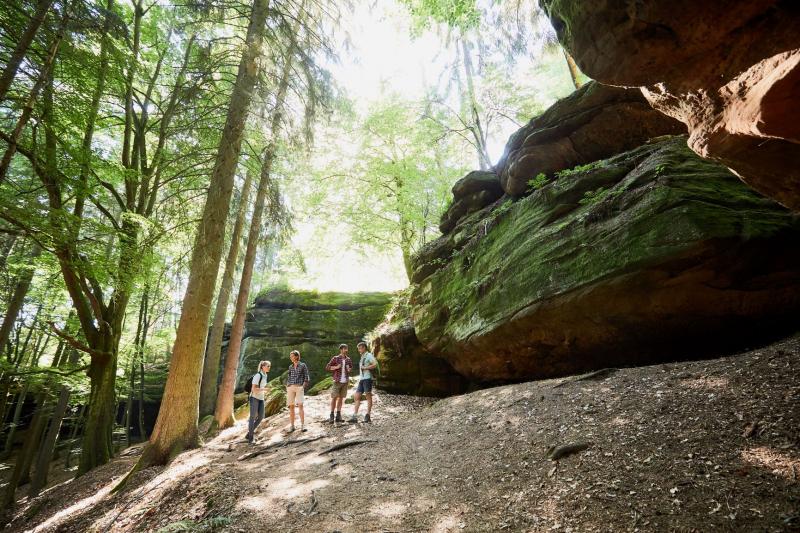 Narrow and winding paths, covered in roots, criss-cross Kirkel Forest, one of the largest forest areas in the region: The “Kirkeler Tafeltour” trail is probably one of the Saarland’s most spectacular rambles because you can fully immerse yourself in an almost mystical landscape. The trail leads past mossy, bizarrely shaped and towering red sandstone formations to pulpits with spectacular views and impressive caves. The highlight of the approximately five-mile tour is a mysterious fountain called Women's Fountain. It is surrounded by mighty rocks in the middle of the forest, which is thought to have been a place of worship for the Celts. The ruins of Kirkel Castle are another place steeped in history. From the conical rock on which the mighty 13th century structure now sits, Roman legionaries once kept a watchful eye on the trade route leading through the valley from Inner Gaul to the Upper Rhine.